The Birds (1963) is a modern Hitchcock thriller/masterpiece, his first film with Universal Studios. It is the apocalyptic story of a northern California coastal town filled with an onslaught of seemingly unexplained, arbitrary and chaotic attacks of ordinary birds - not birds of prey. This Technicolor feature came after Psycho (1960) – another Hitchcock film loaded with 'bird' references. Novelist Evan Hunter based his screenplay upon the 1952 collection of short stories of the same name by Daphne du Maurier. It was shot on location in the port town of Bodega Bay (north of San Francisco) and in San Francisco itself. The film's technical wizardry is extraordinary- the special visual effects were nominated for an Academy Award - and hundreds of birds (gulls, ravens, and crows) were trained for use in some of the scenes, while mechanical birds and animations were employed for others. The film's non-existent musical score is replaced by an electronic soundtrack (including simulated bird cries and wing-flaps), with Hitchcock's favorite composer Bernard Herrmann serving as a sound consultant. Initially, critics were baffled when they attempted to interpret the film on a literal level and measure it against other typical disaster/horror films of its kind. There is no solid, rational reason why the birds are attacking. They are not seeking revenge for nature's mistreatment, or foreshadowing doomsday, and they don't represent God's punishment for humankind's evil. In the decades since its release, critics and fans alike have recognized the powerful allegory and deeply symbolic fabric, elevating ‘The Birds’ status as one of the greatest thrillers of all time.

Rather than a conventional musical score, the film's original soundtrack consisted of a mix of birdcalls and electronic noises from a proto-synthesizer called a trautonium, an electronic instrument Hitchcock had first heard on the radio in Berlin in the 1920s. He found two trautonium composers based in Germany, Oskar Sala and Remi Gassman, to collaborate with his usual composer, Bernard Herrmann. Both Hitchcock and Herrmann felt that the lack of traditional orchestral underscore would further allow the viewer to be pulled into the story, suspending their disbelief to a greater degree and subsequently being more frightened. The choice was clearly effective to this end, although it left audiences who were accustomed to hearing Herrmann’s brilliant orchestral scores (The Trouble with Harry, The Man Who Knew Too Much, The Wrong Man, Vertigo, North by Northwest, Psycho) feeling as though a piece of the puzzle was missing. In cinema, music often serves as an unseen, omniscient “character,” whispering (or shouting) emotional context to the audience. It is the voice of the mind, the heart, the internal and invisible narrator who speaks only truth and helps the viewer to understand when image and dialogue fall short. The choices that the composer makes are often just as powerful as the director’s choice of lens, camera position, editing, etc., and as human as the actor’s expressions and delivery.

​Cinematic musical underscore is a unique art form, elevating the emotional impact of a film while being constrained to exact timing, striking at the heart of the listener while serving the narrative. Knowing this, we can’t help but wonder “how would Bernard Herrmann have treated ‘The Birds’ if given the chance to compose an orchestral underscore?” This new music attempts to offer an answer, in that the composer has written the music in the harmonic and rhythmic style of Herrmann, using his devices and orchestration preferences whenever possible. It exists in a sort of parallel universe, as comfortable now as it would have been in 1963. It is as much an original work as it is an homage to Herrmann’s profound legacy. In contrast to Hitchcock and Herrmann’s attempt to draw the audience into the “reality” of the film, the new score (and live performance) aims to reinterpret the film from an aesthetic perspective. The audience will be aware that the music is being produced in real time, and not coming from the abstract, invisible presence of the film, leaving the “forth wall” of the theater in place. The intent is to flip the experience and draw the film into the reality of the audience and the live music performance they are participating in. 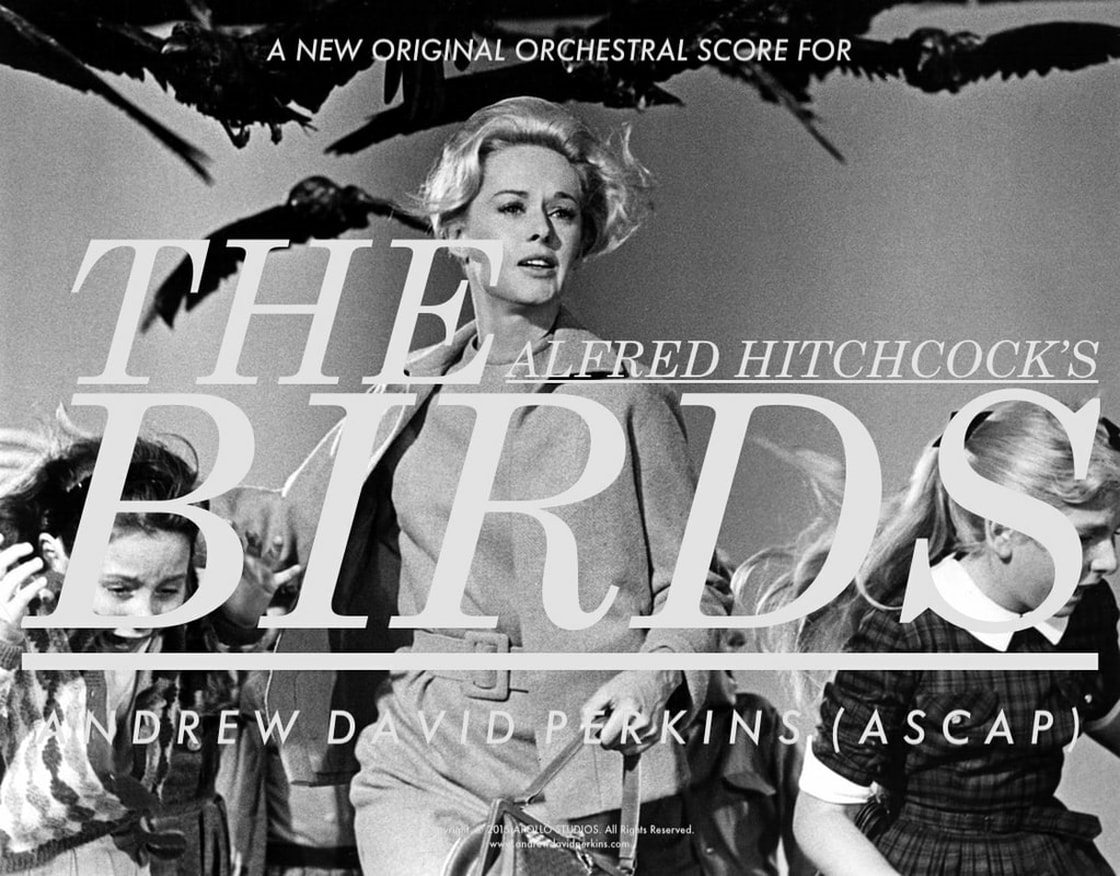