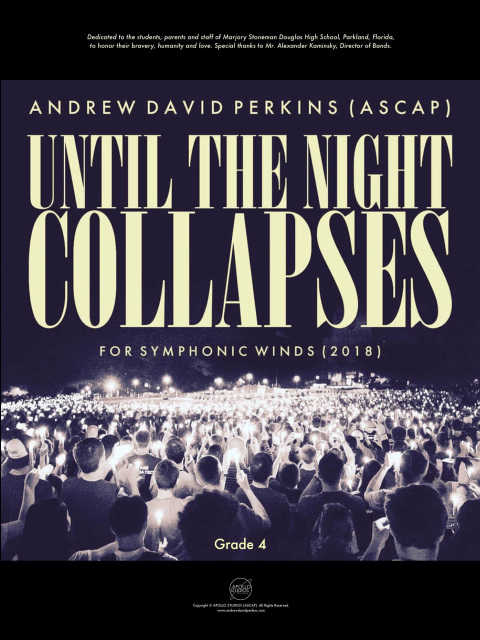 UNTIL THE NIGHT COLLAPSES (Gr.4)

Dedicated to the students, parents and staff of Marjory Stoneman Douglas High School, Parkland, Florida, to honor their bravery, humanity and love. Special thanks to Mr. Alexander Kaminsky, Director of Bands.

"Love! Love until the night collapses..." from the second poem of Canto General (1950), Pablo Neruda's tenth book of poetry. Neftali Ricardo Reyes Basoalto or as he was better known, Pablo Neruda (1904-1973) was a Chilean poet-diplomat and politician, who was awarded with the Nobel Prize for Literature in 1971. He often wrote in green ink, which was his personal symbol for desire and hope.

Hope speaks to me through this line of poetry. I'm watching our American society violently spasm as the rise of hate groups, fascists, Neo-Nazis and white supremacists are met with massive counter-protests. Mass shootings with tragic civilian casualties are becoming a regularly occurring nightmare. Families seeking asylum are being torn apart, and I see so much anger, so much contempt, and horrifically, so much violence. I feel as though we are in the dark, in the deep of night, disoriented and desperately seeking the light.

UNTIL THE NIGHT COLLAPSES is a meditation on the crisis our nation faces and ideals to which we aspire. It interpolates traditional American patriotic songs with fragments of "Sunday, Bloody Sunday" by U2, an anthem for peace and non-violence.