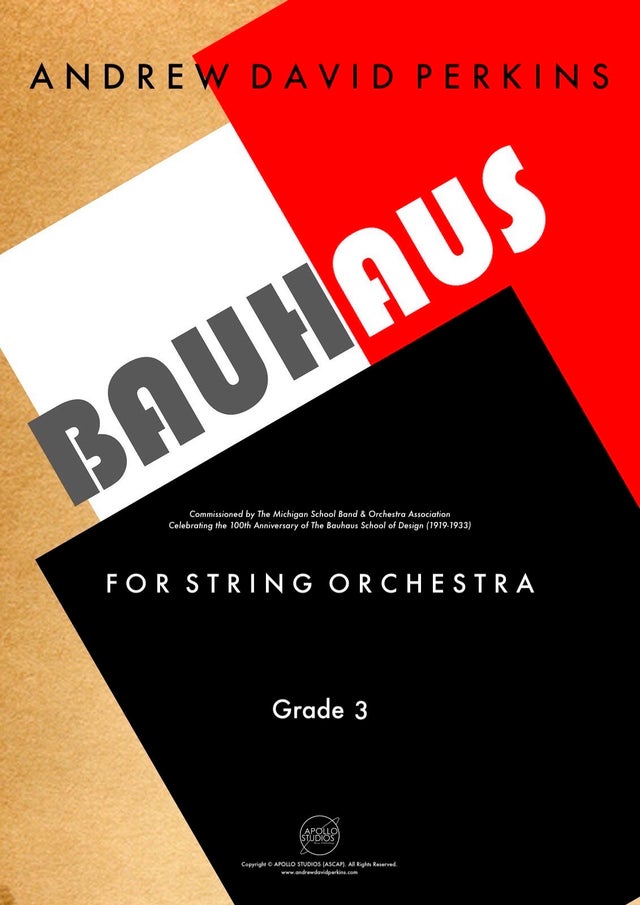 Commissioned by the Michigan School Band & Orchestra Association for their 15th annual All-State Program.Celebrating the 100th Anniversary of The Bauhaus School of Design (1919-1933)

The Bauhaus School of Design was arguably the single most influential modernist art school of the 20th century. Its core objective was a radical concept: to reimagine the material world to reflect the unity of all the arts. This approach to teaching, and to the relationship between art, society, and technology, had a major impact both in Europe and in the United States long after its closure under Nazi pressure in 1933 (The faculty flatly refused to work with the Nazis, and rather than cooperate with the them, the school was closed by the faculty’s vote.). The Bauhaus was influenced by 19th and early-20th-century artistic directions such as the Arts and Crafts movement, as well as Art Nouveau. The school is also renowned for its extraordinary faculty, who subsequently led the development of modern art - and modern thought - throughout Europe and the United States.

The Bauhaus aimed to reunite fine art and functional design, creating practical objects with the soul of artworks. Today, nearly every art curriculum includes foundation courses in which, on the Bauhaus model, students learn about the fundamental elements of design. 2019 marks the 100th anniversary of the iconic school of design, and this work for string orchestra interprets and synthesizes the ideologies that have shaped our modern world.